Sometimes when you walk out the door you are going somewhere that discretion is a must when it comes to EDC gear. Besides that you may want to be able to carry certain items on you at all times, but you don’t want to be weighed down with a bunch of gear strapped to your belt.

Both of these needs can be met with items that are designed to fit in your wallet. I actually keep a little multi-tool in my wallet. It isn’t much really, but it has a lot of functions.

Just this little credit card sized piece of steel has all of these functions: 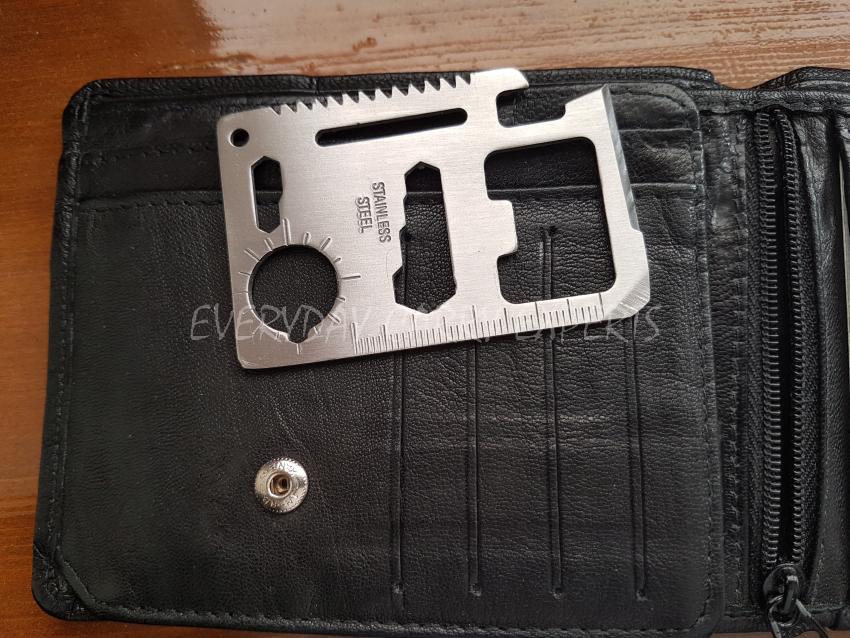 Is it a viable tool?

Well, for something that you can get for only $1, this is actually a pretty useful little tool. The can opener isn’t the fastest way to open a can, but it will open one. It works like the famed P38 U.S. military can opener, it clips on the edge of the can and the sharp edge is pushed into the can, it takes several pokes to open a can but it will get the job done.

The bottle opener opens bottles with no problem, no big explanations needed there. The knife blade isn’t exactly the sharpest when it comes out of the pack, but about 10 minutes on the sharpening stone and it slices with ease. Good enough to be an emergency blade that fits in your wallet. (Although, I have seen a different credit card multi tool that is a folding knife that I like.)

The slotted screw driver is functional as long as the screw isn’t in a tight spot. Forget about it if it is, the screw driver is on the corner of the tool and so you basically need enough room for your fist to use it. As for the ruler, well, it has marks and numbers, it’s a ruler. I’m not sure what purpose a ruler serves in a survival situation though.

The saw blade actually cuts but since it’s only about 2” of teeth there isn’t much of a stroke, but it will cut. The wrench slots on the tool are functional is the nut/bolt isn’t super tight. Without a long handle like you have with a regular wrench (or a spanner if you live there) there isn’t really any way to apply any torque.

Then there’s the butterfly wrench slot (I imagine this is referring to a wing nut), it works fine as long as the “wings” fit in the slot. It saves your fingers and gives you a little more to grip.

That leaves us with the “direction ancillary wrench”. I am not really 100% what that is even for. Online research says that it can be used for a directional indicator on a map, but I don’t think you will have a map it you ever get in a spot that you need to pull this from your wallet.

It also says that you can make a compass with it. But unless it’s cloudy and you can’t see the sun or North Star, then I don’t know why you need a compass. Maybe it’s just me, but I’ve just always been pretty good as saying “north is that way”.

Overall, for a dollar, it’s a handy piece of metal to put in your wallet and forget about. It’s like that fire extinguisher in your kitchen, it’s good to have it there, but you hope you never need to use it.

Here’s a video review of this multi-tool:

A Fresnel lens is a lens that is faceted in order to maximize surface area in a given space. If you have even seen a reflector, the outside is smooth, but the inside has a bunch of angles or rectangles on it, that’s an example of a Fresnel lens.

There is credit card-sized Fresnel lenses that you can buy for a few dollars. They are a flexible sheet of plastic so they will never break in your wallet. These are handy to have in your wallet for emergency fire starting. Keeping these in your wallet is better than keeping a regular magnifying lens. 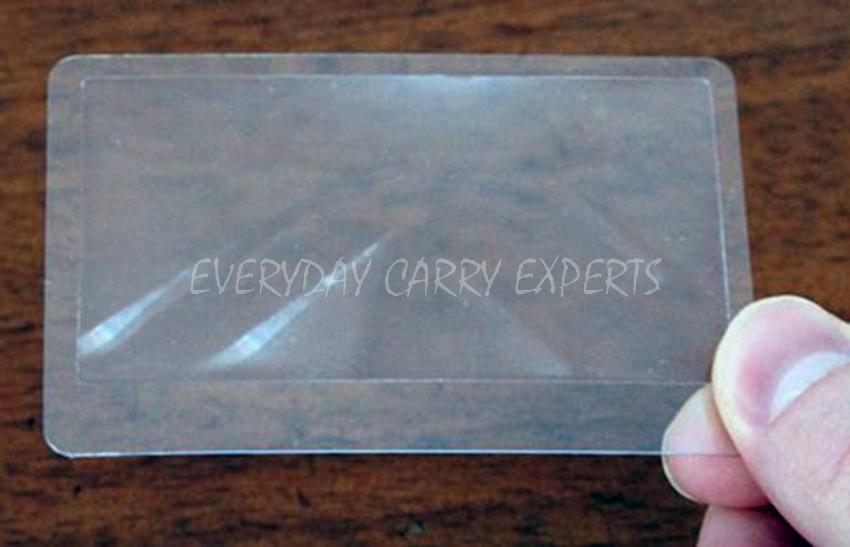 I can say this from experience. I kept a regular plastic disc, about the size of a half dollar in my wallet for years. It eventually was so scratched up it no longer did what it was supposed to do, refract light to start fires. It is in a landfill somewhere now.

I do not have anything in my wallet to replace it, but I would really like a few of these plastic sheet, credit card sized Fresnel lenses to put in my wallet.

I assume if I had a stack of five or so, at the very least the inner ones would all remain useful even if the outer ones became scratched up like my lens did. Everyone that cares about being prepared should have a few of these in their wallets.

They are much less bulky than a lighter, and impervious to dampness like a book of matches (which I have also kept in my wallet off and on over the years).

If you are ever stranded in the wilds and need a fire the credit card sized Fresnel lens for the wallet can be an indispensable item to add to your EDC list.

Here is a video of a guy using a wallet sized Fresnel lens to start a fire:

Even with the blade on the multi tool you still need a knife. There is a credit card sized foldable knife that you can get and keep in your wallet for an emergency. It seems to have a fairly sharp blade, about 2 1/2″ long, thin, about as thick as two credit cards.

There is an older, original version that is all plastic except for the blade, and now there is a new, upgraded version that has an aluminum “card” that folds into the knife handle. The new version has a stainless steel blade.

Of course you can get the older version for a dollar all over the internet. You can find the new aluminum version online as well, but it costs a few dollars more. Then there is a fully stainless steel version by another maker that sells for about 12 dollars. Any of these can be handy to keep in your wallet for cutting tasks or a quick LED light in an emergency scenario.

I wouldn’t have it in my wallet intended for daily use and I definitely would not consider it a self-defense weapon, although I’m sure it could serve as one if the absolute need arose for such. After all, it is a blade, it will cut and it will stab. 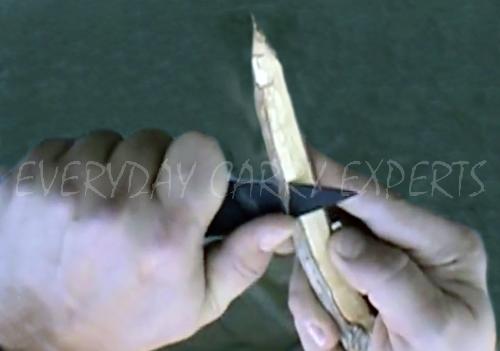 Here is a video of a guy showing both the original plastic version as well as the new aluminum version. https://www.youtube.com/watch?v=1IWSPHiuyok 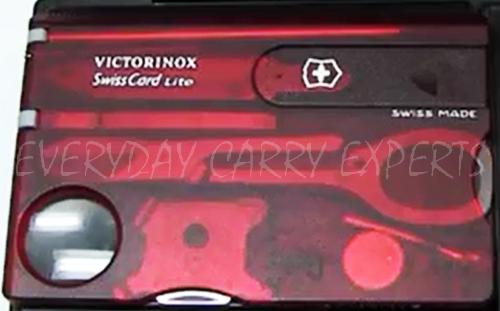 I saw both reviews, they look to have pretty much the same things in them, the classic has a little LED flashlight that could come in handy if you were stranded in the dark. The price tag on these two products is pretty high, in the $40 range. They are sort of like having a Swiss army knife that fits in your wallet.

I own a couple of Swiss army knives, a smaller one I keep on my keychain, and a larger version that I have had for about 32 years. I lost the tweezers and toothpick from the larger on years ago and I broke the saw blade using it to cut fairly thick wood once upon a camp story.

The saw blade worked quite well for the size, I guess my advice would be to use it slowly and deliberately. When I started sawing briskly and forcefully I ended up bending the blade. When I tried to straighten it I broke it.

She really liked the Victorinox Lite as when it’s built it looks like a spiffy Swiss Army knife of old, just a clear candy coated one in cherry red.  I did like it had a straight pin, but why not a sewing pin? It had a really bright LED light at 18,000 MCD but some “tools” that are kind of cheesy for survival. Like a letter opener, ruler and ball point pen. I guess they took the place of the nail file and toothpick on the normal Swizz knives. Tweezers and scissors are cool but the scissors get fatigued pretty quick, and those are super important I think like when cutting paracord, etc.

Here is a video review of the Victorinox Swiss card classic:

Here is a video showing the Victorinox Swiss card lite:

There are also many other versions of wallet sized “survival” multi-tools on the market. There was one I saw with the Bear Grylls name on it, but I wouldn’t use one of those if you gave it to me. I saw his show before and it was so full of bad advice I just wouldn’t put any stock into anything with his name on it as maybe you need to be him to make it work like that, but he is not even using them on his show from what

I have seen and they average very high on the cost range. That’s just my opinion. But anyone that tells you to drink your own urine when you are lost is one of three things that I can’t say here. But you NEVER drink your own pee, so…

I think that some form of wallet sized multi-tool and knife is a good idea to have. I would call them more of a last ditch tool than a survival tool though. Having them would absolutely be better than having nothing in a situation where you became unexpectedly stranded and/or lost.

But to be practical I wouldn’t rely solely on any of these items for my survival in a situation where I can pack a bag. Any time I leave the house I generally have one or two guns on me, two or three knives on me, and my brain which is full of knowledge that supersedes any folding gadgets or sparking fire starters.

I’m a lot older than I used to be, nowhere near in the shape I used to be, but if I were “dropped” in the middle of some woods I’m sure I could get out. My biggest enemy would be weather, cold, rain, snow, etc. I would have to walk slowly and carefully, and I would have to start making camp early every night so my travel time during the days would be short.

everydaycarryexperts.com is a participant in the Amazon Services LLC Associates Program, an affiliate program designed to provide a means for sites to earn advertising fees by advertising and linking to Amazon.com.

Any cookies that may not be particularly necessary for the website to function and is used specifically to collect user personal data via analytics, ads, other embedded contents are termed as non-necessary cookies. It is mandatory to procure user consent prior to running these cookies on your website.